Back in 2001 the Bros decided to have a go at writing.  After an epic overland journey from London to Australia in 1999 and wild year living in Australia in 2000 the Bros decided to retreat to New Zealand to chronicle some of their adventures.  It was a tough decision on where to start, but they decided to capture their epic 1997 circumnavigation of North American that came to the forefront.  Hidden in a small batch in Waipu, Northland they spent their days writing.

A Journey of three brothers on the road of life. 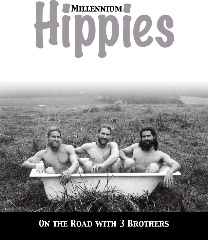 In an age of dysfunctional families and divided sibling rivalry here is a touching story of three close brothers growing together and learning about each other and the world, through a vagabond, penniless trip around the backroads of North America.  Three young brothers from Canada, their Australian mate and a fish named Larry commandeer an old station wagon and for six months wander from Cape Breton Island to Alaska, Mexico and back. It's a peculiar 40,000 km marathon of mad interactions and quiet observations, jammed between yet another baked bean dinner and uncomfortable roadside slumber as the love for their old 1973 Calypso blossoms into the girlfriend none of them had ever wanted. Millennium Hippies is an introspective insight of brotherly bonding and a cascading adventure of youth on the loose.